Today marks the end to a busy and wonderful holiday season filled with cookies and turkey, friends and family.  I wanted to do a quick Christmas season re-cap.
We've got two traditions we've stuck to--the first is hosting Christmas Eve, the second is roasting a turkey and having friends over on New Years Day.
Christmas Eve at our house was fun this year, Andy's immediate family came along with my sister and her boyfriend Ryan and my dad.  We decided to make home-made fettucini alfredo and it was a hit!  Andy made the pasta and I made the sauce.  I think we'll definately do it again next year, but next I'll plan for somthing other than cheesecake for dessert--that was a bit heavy!

After dinner came the best part--at least as far as Oliver was concerned.
Hey little man--do you know what time it is? 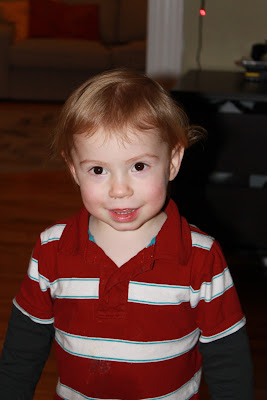 ﻿
It's time to open presents! 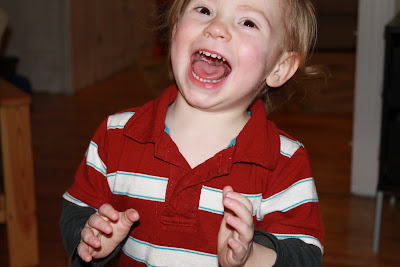 Oliver had fun passing out the presents (with Auntie's help) and then ripping into his (rediculously large) pile of gifts. 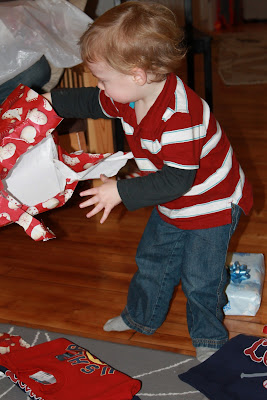 (Oliver got a lot of clothes for Christmas, to which mama and papa said "yea!" and Oliver said "meh... next"  you can see his discard pile here) 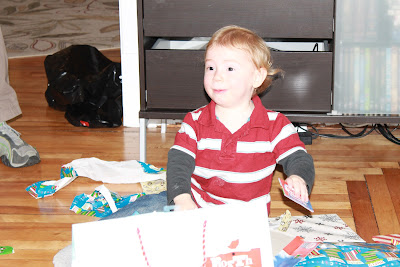 In this picture Oliver is saying "big train" as he opened one of many "Thomas the Tank Engine" gifts.
(Pardon the over exposure...still trying to learn my new camera).
Christmas morning he was very excited to wake up to find more presents--he dug right in. 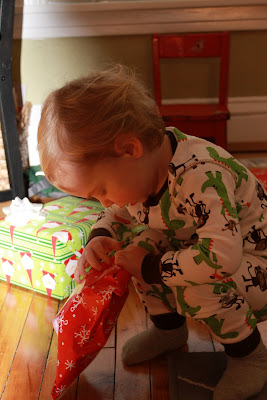 I honestly think I had as much fun watching Oliver open his presents as he had opening them!  When it comes to Chrismas I'm truly a kid at heart.
Eventually-he'd had enough.  When he got to his stocking, he carried it up to me and said "I no want this." 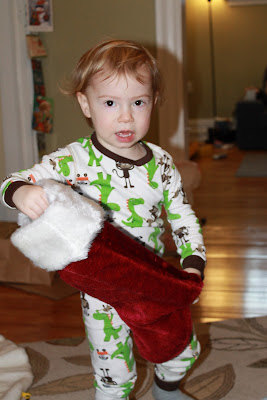 I guess there is such thing as too much of a good thing.
Posted by Ann at 3:24 PM 1 comment: Links to this post